WILL SIN EVER ARISE AGAIN? 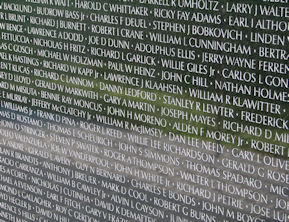 I stood before the Vietnam war memorial in Washington D.C. It stands in memory of all the soldiers who died in that war. Every deceased soldier's name is etched onto the monument. I reached out my hand and touched a name. His parents no doubt had high hopes for him. Marriage. A family. Grandchildren. Who knows all the good he could have accomplished. All that hope was erased in one horrible moment. A monument is important. It helps us to remember the misery, the terrible cost of war.

The question of whether sin could arise again is a good one. I believe there is insurance against that, and that insurance is us. We are the war survivors of a sin-torn world who will live for eternity to warn others of the unfathomable cost of sin.

Does God have a monument to sin? Something that will remind us of the horror of sin? An interesting verse is found in Rev. 14:10 which speaks of the wicked: "…the smoke of their torment ascendeth up for ever and ever." Now, I do not believe the wicked burn forever. Psalm 37:20 says the wicked will consume away into smoke. So what is this smoke of torment that rises forever and ever?

One time a vacant house burned down near my home. After the fire department extinguished the fire, I was amazed that the smoke continued to rise from the ashes for hours. In fact, even the next day there was still smoke rising.

When something is utterly consumed by fire, the only evidence remaining that it ever existed is the smoke. Therefore, the smoke is the evidence that something once existed but burned up. Now, what is this "smoke" or "evidence" that ascends for ever and ever, even after the death of the wicked? What could it be?

Well, the Bible tells us what it is. The following prophecy describes the destruction of the ancient nation of Edom:

"It shall not be quenched night nor day; the smoke thereof shall go up for ever; from generation to generation it shall lie waste; none shall pass through it for ever and ever." (Isaiah 34:10)

The Bible says of Edom, "none shall pass through it for ever and ever." When we are in the eternal kingdom, the memory of the horror of sin will ensure that in the eternal kingdom, none shall pass through the way of sin for ever and ever. Through-out the billions and billions and billions of years of eternity sin will never rise again in the universe.

Why? "The smoke of their torment rises for ever and ever." It is the smoke that ensures the perpetual peace and harmony of the universe. The smoke is a war memorial standing forever as a reminder of the unfathomable cost of sin.

Only when we stand on the shores of the lake of fire will we finally understand. Every one of us will most likely know someone in that lake. A friend. A relative. A co-worker. Perhaps even someone close to our heart. Only then will we fully understand the unfathomable cost of sin! Only when we see the smoke will we experience the full horror of sin. Only when we see people we knew and loved perish for ever will we finally understand the monstrous horror of sin. The staggering pain of eternal loss, the wrenching emotional scars of that moment will forever insure that sin will never rise again. I believe we will be the evangelists of the Universe, forever testifying in every corner of Father's vast realm not only of the incomparable love of Father, but also of the unfathomable cost of sin.